During my backpacking trip to Greece, I learned to truly enjoy the Lord as a father again. I was able to slow down for a week, marvel at His most awe-inspiring creation, and see how much his love radiated through the other women walking alongside me.

I learned in Greece that while the world might try to convince me that I have to prove and earn, that my father delights in me just as I am. He reminded me along my journey that I did not have to become any better for Him to love me radically. The community of women inspired me beyond words with their courage- whether it was hiking for the very first time or learning to heal and be held by Jesus.

These women also inspired courage in me that has since changed my career path. While we walked through beautiful Grecian towns, along with the coast and worshiped as the sunset over the Mediterranean sea, I was reminded constantly that this beauty was a reflection of the intimacy and romance of being loved by Christ. 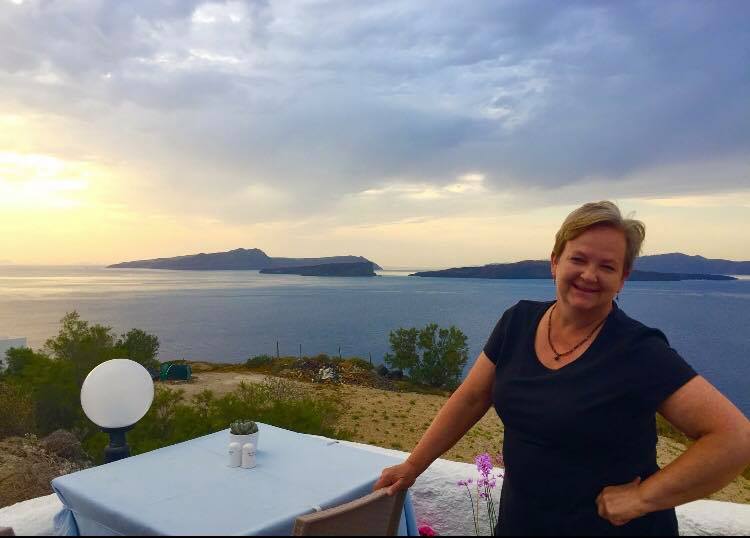 I am a 57-year-old RN Case Manager, who lives in Grand Rapids, Michigan. I have two grown children, Casey (27) who is married to Ronny, and Matty (24), who lives in Holland, Michigan.

Last year, on January 6, (2018) my older sister, Karla, passed away very unexpectedly. She was single, never married, had an amazing professional career in nursing, and lived in Cary, North Carolina. She had just been home to Michigan (where I live) for the holidays, so I had just seen her. We were so shocked and saddened by her death. Karla was a strong Christian, and without a shadow of a doubt, I know she is celebrating in Heaven. The next several months was such a blur for me and for my family..traveling to North Carolina for a Memorial Service, settling her financial affairs, and lovingly going through her belongings so we could list her house and sell it. Eventually, my sister, Kristen and I drove her car to Michigan for my parents. 5 trips to North Carolina in less than 5 months! There was not really any time to grieve, or even think about grieving.

My daughter, Casey, and her husband, Ronny, work for Adventures in Missions. Their office desks used to be situated near Betty Means and Mama C (Carol), who also worked for AIM at that time. In February, Casey mentioned the Women’s Walking Journeys, led by Carol and Selena. Casey encouraged me to contact Carol, and think about “taking time out for me”. I had a lovely conversation with Carol, and that convinced me to sign up for the “me trip.”

I trained for the trip by walking and walking, and, by praying that I would be given the energy to not only participate, but to also to thrive on this journey! I reluctantly purchased walking sticks and “practiced” using them on the flat streets of Grand Rapids, Michigan! SO glad I did. They were an awesome help as we navigated the sometimes rocky and uneven terrain on the islands.

I could write volumes on what the actual trip meant to me. In a nutshell, meeting this group of women, praying with them, sharing my story, allowing myself to lean in on someone, was a true gift! I cried, I laughed, I walked silently, and yes, I actually EXHALED.

I didn’t lead, I didn’t organize, I didn’t plan…the only thing that became a “happy accident” was that I seemed to have a rather uncanny ability to find the “Red Dot” that guided our way on the rough, hilly, remote terrain of the island countryside. Hence, I was lovingly given the nickname, “Dottie”.

I have been a Christian for a long time. I have been in leadership positions at my local church. I have participated in Parent trips led by Adventures in Missions. I am at a time in my life where I have the opportunity to really dive in and get involved in programs that can further God’s Kingdom. But, I needed time to grieve. I needed time to cry and to laugh and to tell stories about my sister. I needed time to heal. I still need time for all of those things.

I believe that the Greece trip was my springboard for starting the healing process so I can be ready for what God has in store for me. In fact, my sister Kristen and I are signed up to go on the Ireland trip in September!

So, think about it…put your toe in the water…jump in…dive in…or do a cannon ball (yes, I love the water)…JUST DO IT!